SC throws away petitions vs con-ass

MANILA, Philippines -- The Supreme Court has junked two petitions seeking to stop a House resolution calling for a constituent assembly (con-ass) to amend the 1987 Philippine Constitution.

In the en banc resolution penned by Chief Justice Reynator Puno, the high court refused to exercise its jurisdiction over the two consolidated petitions -- filed by lawyers Oliver Lozano and Evangeline Lozano-Endriano, and Louis Biraogo -- calling for the nullification of House Resolution 1109.

"The fitness of petitioners' case for the exercise of judicial review is grossly lacking," the resolution said.

It added that the court's power of review "is limited to actual cases and controversies dealing with parties having adversely legal claims, to be exercised after full opportunity of argument by the parties."

The SC said the petitions were found to be premature or "unripe" for review because they failed to show proof of "adverse injury or hardship from the act complained of."

It also noted that "no actual convention has yet transpired and no rules of procedure have yet been adopted...no proposal has yet been made, and hence, no usurpation of power or gross abuse of discretion has yet taken place...the House has not yet performed a positive act that would warrant an intervention from this Court."

Ten justices concurred with Puno, one abstained and the other was on official leave
Posted by marites salce at 3:52:00 PM No comments: 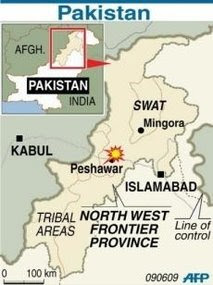 PESHAWAR, Pakistan (AFP) - – Pakistani police have pulled bodies from the charred rubble of a luxury hotel in northwest Peshawar after a suicide car bomb killed 16 people in the city troubled by Taliban violence.

A top provincial official said the massive blast at the Pearl Continental Hotel late Tuesday was likely the latest in a string of revenge attacks by Islamist militants over a six-week offensive against them in the northwest.

Police hunting for the dead moved from room to room in the five-star hotel on Wednesday, large parts of which were reduced to rubble when at least two attackers shot security guards and then slammed an explosives-laden car into the building.

"The blast is a reaction to the army offensive in Swat and Malakand. The possibility of this type of terrorist attack cannot be ruled out in future," North West Frontier Province information minister Mian Iftikhar Hussain said.

Police official Abdul Ghafoor Afridi told AFP that 57 people were injured, including some foreigners who have been taken from Peshawar, the provincial capital, to Islamabad for treatment.

"The number of casualties could rise as we fear that some people are still trapped under the debris," Afridi said.

"One portion of the hotel was totally destroyed. Three people including a manager of the hotel are missing and we fear they are under the debris."

An AFP reporter at the scene saw rescue workers ferrying out the body of a badly-disfigured hotel worker as his colleagues looked on in tears.

The United Nations said the dead included two of their employees -- Serbian national Aleksandar Vorkapic, who worked for the refugee agency UNHCR, and Perseveranda So of the Philippines who worked for children's agency UNICEF.

Dozens of aid workers were staying at the opulent hotel before heading out to refugee camps in North West Frontier Province, where Pakistan launched military action in three districts on April 26 to try to crush Taliban rebels.

The air and ground assault in Swat, Lower Dir and Buner has sent up to tw o million people fleeing their homes.

Tuesday's bombing was the seventh deadly blast in Peshawar in a month. More than 155 people have been killed in similar attacks across Pakistan since the anti-Taliban military offensive began.

Early reports suggest at least two men dressed as security guards shot their way through a security barrier and into the hotel compound, where they managed to detonate about 500 kilogrammes of explosives packed in a pick-up truck.

"It was such a huge and powerful blast that the engine flew up to the fourth floor of the hotel," police official Shafiullah Khan told AFP.

In late May, 24 people were killed in a similar gun and suicide car bomb attack on a police building in eastern Lahore -- an attack claimed by Pakistan's Tehreek-e-Taliban (TTP), which warned of more "massive attacks."

No group has yet claimed responsibility for Tuesday's hotel blast, and Hussain said a committee had been set up to investigate.

"Police experts are collecting evidence from the spot and debris of the hotel. They have also recorded statements from the hotel employees and those present at the scene," he told AFP.

"We have already alerted all the security and law enforcement agencies and we have declared a high alert in Peshawar and other cities."

The current campaign centred on Swat was launched when Taliban fighters advanced to within 100 kilometres (60 miles) of Islamabad, flouting a deal to put three million people under sharia law in exchange for peace.

The offensive has the backing of the United States and enjoys broad popular support among Pakistanis exasperated by worsening Taliban-linked attacks, which have killed more than 1,960 people since July 2007.
Posted by marites salce at 3:12:00 AM No comments:

What Your Hair Says About You!

IBM will file a P200-million libel suit against GSIS

MANILA, Philippines - The Philippine unit of computer giant IBM will file a P200 million libel suit against the Government Service Insurance System (GSIS) after it reaped “unwarranted public attacks" from the state-run pension fund. IBM’s local unit has begun legal actions to “vigorously defend" its reputation, the company said in a statement. Last month, the state-run pension fund for public employees blamed IBM for a software application that has delayed transactions of 20,000 of its estimated members. The software application is reportedly part of GSIS’ Integrated Loans, Membership, Acquired Assets and Accounts Management System (Ilmaams). “We cannot stand by and allow our company's reputation to be tarnished by blatantly inaccurate and misleading accusations," IBM said in a statement. “This is an action that we do not take lightly. IBM has been in operations in the Philippines for more than 70 years, and has over 7,000 employees. During this time, we have built our business by upholding the highest level of corporate ethics and integrity. Anything less would betray the trust that clients, citizens and governments place in us every day." "Our preference is to work constructively with our clients and our business partners to address any and all issues they may have, in a spirit of mutual cooperation and partnership. Unfortunately, the deliberately libelous actions by the GSIS leave IBM with no other course of action," IBM added. For its part, GSIS believed the upgrade only worsened the problem as the database began mishandling data, which prevented its simultaneous use. Earlier, Consuelo Manansala, GSIS executive vice president for operations, said the crashes could not come at a worst time for 1.5 million GSIS members and pensioners because May and June are peak months for loans and benefits since these are enrollment and school opening seasons. GSIS chief legal counsel Estrella Elamparo also said the pension fund is mulling to file charges against IT contractor Questronix Corp. and IBM. Questronix director for business solutions Bert L. Bartolome allegedly wrote in a May 15 letter to the GSIS that IBM database software called IBM DB2 is the root cause of the crash based on the findings of the computer giant's laboratories in Canada. Citing the report, GSIS said the overflow caused DB2 to "lose certain information in the leading byte and data may end up in the wrong table, resulting in subsequent page corruptions.
Posted by marites salce at 3:11:00 PM No comments: